Paravicini On the Swedish Approach to Covid19

In reality, recent studies have shown that Swedish were not "mandated" to isolate - they volunterily maintained social distancing and wore masks: 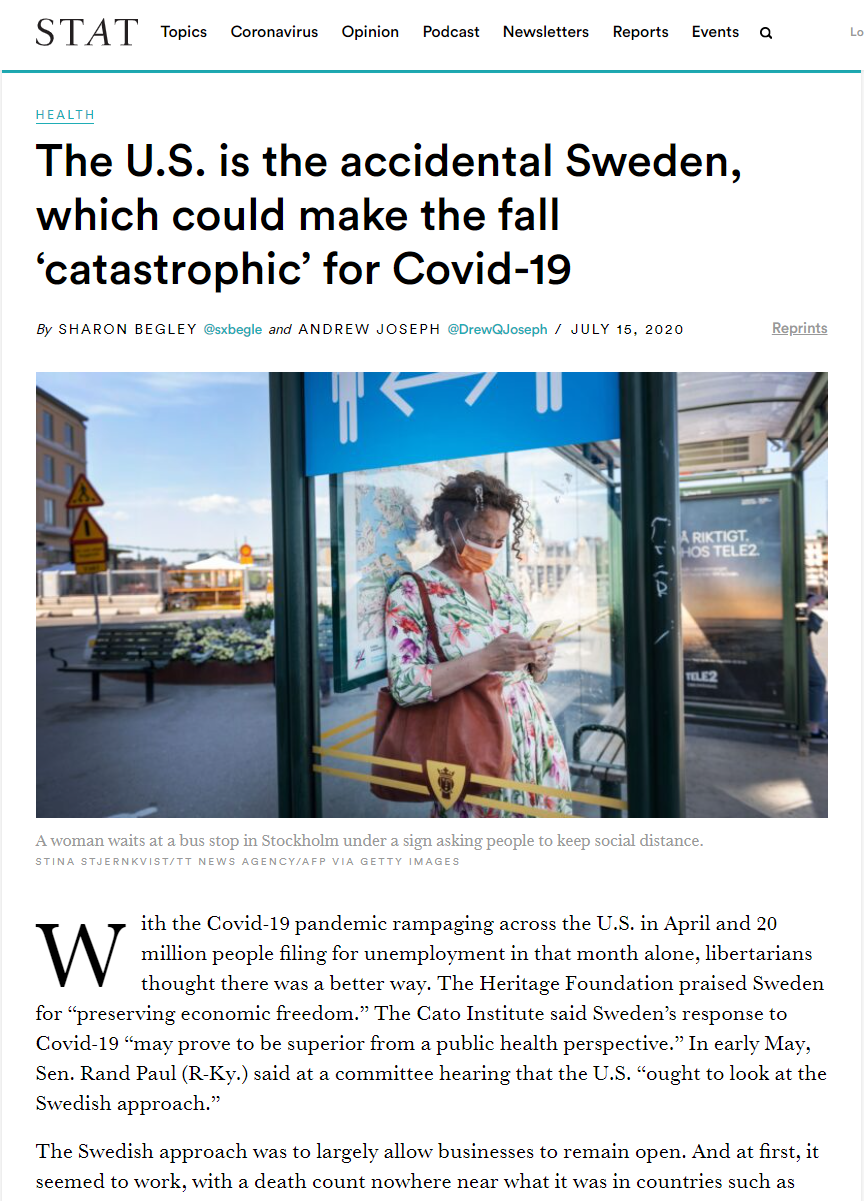 My colleague from Sweden indeed confirmed the findings

"although the international media depicted Stockholmers as going about life “normally” the reality is that the majority of drastically changed their daily behaviors.  An interesting study from the The Marcus Wallenberg Laboratory for Sound and Vibration Research (MWL), Department of Engineering Mechanics, showed a marked decrease in urban activities  (Study link)

I agree that comparing the US and Sweden’s corona strategies is essentially pointless as the national mentality (strong individual mandate vs strong cohesive collective) and the very structure of our respective societies are incomparable.  It is true that much of the social distancing measures here were never “mandated” but several independent measures (decibels, cellular data tracking travel) have confirmed that “most” people in Sweden followed the social distancing recommendations, and then some.

Much emphasis has been rightly placed on the inability to protect the most vulnerable of society in the beginning of the pandemic (namely the elderly in care homes and day labor immigrants).  The very nice thing about having an organized, centralized, national pandemic strategy is that problems were identified early and real efforts were made to address them.

For example, unskilled day laborers (who weren’t protected by a contract and thus didn’t get guaranteed paid sick leave) were thought to be a big source of spread among the elderly care homes. Within a month or two, those day laborers were offered up to a month of paid full time educational training (how and when to use PPE, hand sanitizing, etc) and now have paid sick leave so that they don’t have to chose between staying home if they are just a little bit sick and getting paid.

Also, the rules have relaxed around child’s sick leave pay for any parent with children who are just the slightest bit sick and need to stay home from school.

Just a few examples of how the people of Sweden are willing and able to follow the national health and government recommendations because of a strong trust in government, a humane social safety net that seeks to serve all equally, lack of politicization of public health matters, and quick response time in crisis management."

In addition to a national healthcare system, Sweden does not nearly have the same rates of diabetes, obesity, cardiovascular and asthma as the United states (the US has some of the highest rates of these in the world, particularly compared to developed countries).

It is sad that our leaders, to preserve their economic interests, have put again profits before people.  Instead of fighting each other we should be supporting each other.  How diffidult is it really to wear a mask.

We need to reopen, yes, and it would happen much sooner at a much lower costs, if the White House leadership had promoted the wearing of masks, and basic health information such as having adequate dosages of Vitamin D and vitamin C, for example.  Studies have now confirmed what naturopathic and integrative practitioners have known all along.  These basic measures, and others, have been shown to decrease our propensity to these viral infections, as well as their severity.

That is what we should be focusing on, as well as supporting local businesses and communities.  My utmost respect for the Oregonians who have fought the fires and protected their own communities.

Vote Green, Volunteer, get out the vote and donate